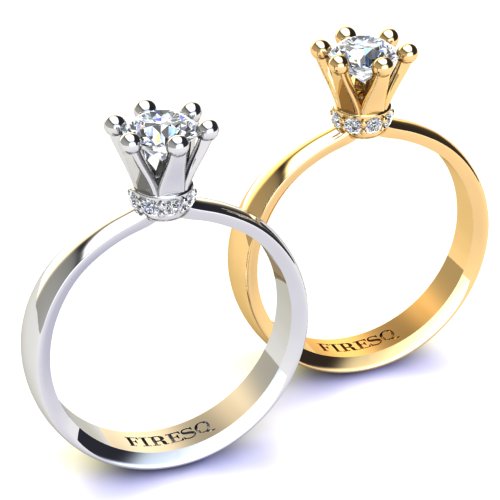 The engagement ring is a symbol of love, opens the windows of the heart and the path to a happy life. Both its circular shape and the central stone are representing a shared and true love, but also a connection as durable as the diamond adorning it. The perfect engagement ring is the one offered from the heart and with all the love, at the right moment.

The ring is carried on the fourth finger of the left hand, as it is believed that the respective finger, the “ring finger”, is in a direct connection with the heart.

Over the time, the design of the engagement ring has gone through several stages. The Venetian rings of the 15th century were very wide and adorned with many gemstones. Those used in the Anglo-Saxon countries were thin and with a very discreet single ornament.

At first, the engagement ceremony was more elaborated and more important than the marriage itself, which was just a simple fulfillment of the engagement’s commitment. Much later, in Christianity, the ring has begun to be part of the wedding ceremony.

This website uses cookies to improve your browsing experience, perform analytics and research, and conduct advertising. To change your preferences, see our cookies page. Otherwise, closing the banner indicates you agree to the use of cookies on your device. Find out more.